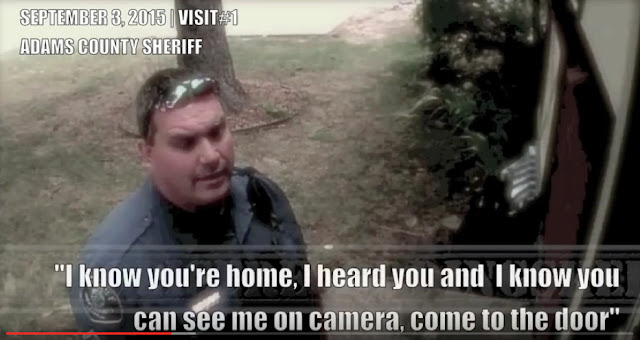 NORTHGLENN, CO — Earlier this year in September and October of 2015, COPBLOCK.org featured this story about the Kekoa family, parents of six who were harassed and intimidated by uniformed government police employees from the city of Northglenn, CO all because the next door neighbor was being “ignored” and did not like the fact that she was being “shut-out” by the Kekoas.

The aggressive tactics of Northglenn’s “Professional Mediation Task Force” resulted in Curtis and Danielle Kekoa being terrorized and forced out of their home into a confrontation with four uniformed police employees for over 45 minutes. Throughout the confrontation, the Kekoas expressed dozens of times that they have been harassed by the neighbor for years and they “just want to be left alone.” At the end of the lengthy disturbance, the four Northglenn officers agreed to tell the neighbor to leave the Kekoa family alone, encourage her to build a privacy fence and to mind her own business. 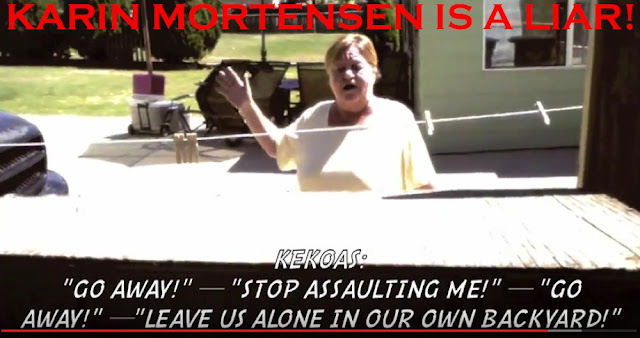 As if the tyrannical incompetence and violations of civil rights on behalf of a busy-body neighbor wasn’t bad enough by the city of Northglenn, exactly two weeks after the disturbance in front of the Kekoas’ home, the Adams County Sheriff was sent over “again and again” to serve Curtis and Danielle Kekoa with false protection orders on behalf of the neighbor. 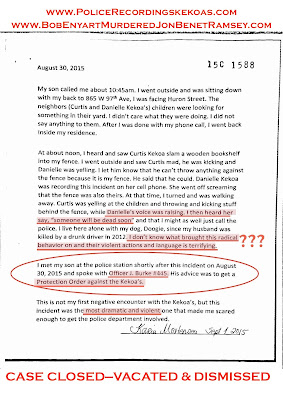 First the next door neighbor, Karin Mortensen calls the police on the Kekoas because she is being “ignored,” then within two weeks Karin Mortensen is falsely claiming “abuse of the elderly” and “physical threat/violence” in front of an Adams County Judge after conspiring with Officer J. Burke #445 Northglenn Police.

Judge Stephen Robert Fatzinger signed off and issued the temporary protection orders against the Kekoas without having any proof or evidence of a direct threat or specific act of violence. Instead, false accusations were once again filed against the Kekoa family as the ongoing history of harassment and intimidation by law enforcement continues. To this date, the Northglenn police have not investigated the facts of the matter. The Kekoas are always presumed to be GUILTY and are forced to prove their innocence.

Watch full video CAUGHT ON CAMERA of the Adams County Sheriff making FIVE home visits throughout the entire month of September 2015 to serve Curtis and Danielle Kekoa with false protection orders. Also watch to see the “most dramatic and violent” incident at the fence that has the neighbor, Karin Mortensen, allegedly scared for her life. Karin Mortensen is a manipulative liar and the Kekoas repeatedly said, “Stop assaulting us!” “Go away!” and “Leave us alone.”

Also CAUGHT ON CAMERA is video of Northglenn Police Officer J. Burke #445 admitting to conspiring with the neighbor to have false protection orders placed against the Kekoas without seeing any “proof” or “evidence” or doing an investigation. Find out exactly what happened between Danielle Kekoa and Karin Mortensen and judge for yourself to see if it qualifies as “elderly abuse” and decide who the real criminal is.

— THURSDAY, AUGUST 20, 2015 at 11:00am—Less than 24 hours later, three Northglenn uniformed code-enforcement officers, including Supervisor Stephanie Pelster, Officer Tom Carlson, Officer Phil Steibler, and a uniformed Northglenn Police Officer Michelle Soustek #438 are caught on camera forcing Curtis and Danielle Kekoa out of their home and into a confrontation because the neighbor doesn’t like being “shut-out.”
*Watch full video CAUGHT ON CAMERA: HARASSMENT & INTIMIDATION by NORTHGLENN "MEDIATION FORCE" vs. THE KEKOAS

According to Northglenn, CO city Councilmember, Gene Wieneke Ward IV, the code officers “should have been arrested” for their unlawful and aggressive contact with the Kekoas, yet to this day, nothing has been done to make the situation better, even though there were no code-violations, no crimes, no probable cause and no warrant to justify such actions. Curtis and Danielle Kekoa, along with their six children have only found themselves under more unjustified attacks by the government.

— SUNDAY, AUGUST 30, 2015 at 12:03pm—Ten days after the unlawful disturbance, Curtis and Danielle Kekoa are harassed and assaulted by the neighbor, Karin Mortensen in their own backyard, once again as it has happened countless other times before. This time the entire event is caught on camera. Later the same day, Karin Mortensen goes into the Northglenn Police station to file a false complaint with Officer J. Burke #445 who then advises her to obtain false protection orders against the Kekoas. 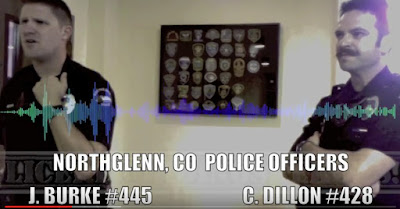 — MONDAY, AUGUST 31, 2015 at 3:00pm—Curtis Kekoa goes into the Northglenn Police station to file a complaint against the neighbor for harassment. Officer J. Burke #445 was caught on camera demonstrating a complete lack of courtesy, professionalism and respect when Curtis Kekoa attempted to express concerns. Burke refused the report because he conspired with Karin Mortensen the day before to have false protection orders placed against the Kekoas. 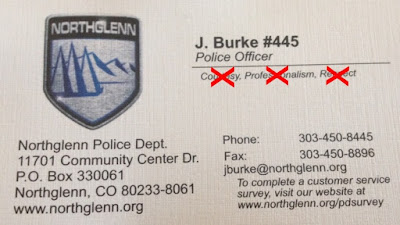 One hour later on Monday August 31st, Danielle Kekoa contacted Supervisor Stephanie Pelster and left a third voice message requesting a follow-up. All attempts to file reports about the harassment with the Northglenn Police since 2011 have been mocked, ignored and dismissed as the Kekoa family continues to be falsely accused, targeted, victimized and threatened by those who are sworn to “Serve and Protect”—NOT TO SERVE FALSE PROTECTION ORDERS AGAINST INNOCENT PEOPLE! 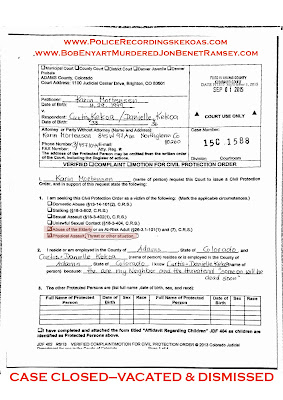 — VISIT #1: THURSDAY, SEPTEMBER 3, 2015 at 10:54am—Exactly TWO WEEKS AFTER the harassment by Northglenn neighbor—Adams County Sheriff’s deputy A.J. Roth attempting to serve false protection orders against Curtis and Danielle Kekoa by the neighbor Karin Mortensen who is claiming “elderly abuse” after she wasn’t able to force the Kekoas into a “mediation” and manipulate them into doing something they don’t want to do. FAIL #1

— VISIT #3: FRIDAY, SEPTEMBER 11, 2015 at 8:38am—Adams County Sheriff’s deputy Robert Riggins attempting to serve false protection orders against Curtis and Danielle Kekoa by the neighbor Karin Mortensen. Knocked once. Left a business card and was quickly on his way. FAIL #3 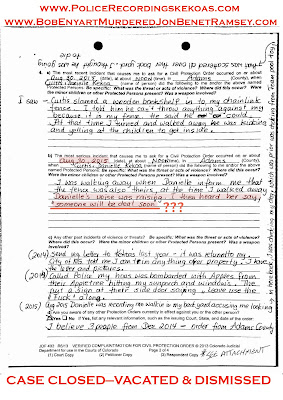 — VISIT #4: THURSDAY, SEPTEMBER 17, 2015 at 9:42am—Adams County Sheriff’s deputy A.J. Roth attempting to serve false protection orders against Curtis and Danielle Kekoa by the neighbor Karin Mortensen who doesn’t like the fact that the attempts are failing and nearly backs into the deputy’s vehicle as she pulls out of her driveway. FAIL #4


*REMEMBER: “If somebody is banging on your door and you don’t want to answer it, don’t answer it.” — Officer Tom Carlson, Northglenn Code-Enforcement 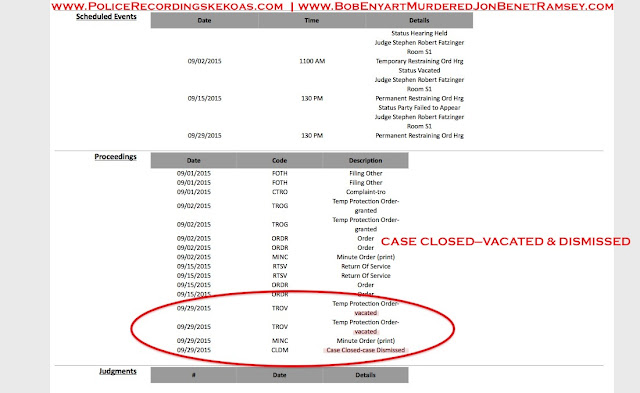 *LESSON OF THE DAY:
IF YOU IGNORE THE SHERIFF, HE WILL GO AWAY!
AND ALWAYS RECORD THE COPS!