Follow-Up Call with Officer Tom Carlson re: CAUGHT ON CAMERA—Harassment & Intimidation by the City of Northglenn, CO “Professional Mediation Task Force” against the Kekoas over “Ignoring” the Neighbor

NORTHGLENN, CO — In September 2015, COP BLOCK featured this story about the Kekoas titled:  Harassment and Intimidation Against Innocent Colorado Family for “Ignoring” Neighbor

The article detailed the news about four uniformed government officers from Northglenn, CO Neighborhood Services Code Enforcement who were sent over to harass and intimidate Curtis and Danielle Kekoa, parents of six, all because the next door neighbor was being “ignored” and called the police to complain.

That’s right—the nosy neighbor didn’t like the fact that she was being “shut-out” and “ignored” by the Kekoas, so the Northglenn Police responded right away to the 911 call, then later sent over its “Professional Mediation Task Force” under the color of law to help assist in the harassment.


On August 27, 2015, one week after this huge unnecessary disturbance in front of the Kekoas’ home, Danielle Kekoa and Officer Tom Carlson of Northglenn “Professional Mediation Task Force" talk over the phone to discuss the tyrannical incompetence and violations of civil rights on behalf of a busy-body neighbor who has nothing better to do than meddle in the Kekoas’ business. Of course, Northglenn Police employees like Tom are willing and eager to assist the needs of the “elderly” neighbor and quick to follow-up on all of her complaints and false allegations against the family.

Not only did the Northglenn Code Enforcement Officers violate the privacy of the Kekoas by peering and prowling over the fence into the yard where their children play, the Supervisor Stephanie Pelster attempted unlawful entry through the front door, aggressively knocked over 30 times then yelled at the window forcing the Kekoas out of their home and into a confrontation.


All of this activity is caught on camera from several different angles and the FULL VIDEO of this disturbance on August 19-20, 2015 can be viewed here:

Watch the latest example CAUGHT ON CAMERA: Harassment & Intimidation by the City of Northglenn, CO Neighborhood Services “Professional Mediation Task Force” against the Kekoas over “Ignoring” the Neighbor. — See it to believe it!

BANG ON OUR DOOR & YOU'RE GONNA GET VIDEO TAPED!

According to Northglenn, CO city Councilmember, Gene Wieneke Ward IV, the code officers “should have been arrested” for their unlawful and aggressive contact with the Kekoas, yet nothing has been done to make the situation better, even though there were no code-violations, no crimes, no probable cause and no warrant to justify such actions.

Throughout the entire 45 minute scene in front of the Kekoas’ home, Officer Tom Carlson repeatedly lectures the Kekoas to take part in their “new mediation program” and stresses the importance of “keeping the lines of communication open” so the neighbor can have access to the family whenever she wants. The Kekoas expressed dozens of times during the incident that they just want to be left alone and don’t want anything to do with the neighbor because she is mentally-ill, unstable and dangerous. For the past few years the Kekoas have been harassed by the neighbor and had law enforcement involved over frivolous concerns like “apples” falling from the tree and imaginary “pool noodles” flying over the fence. 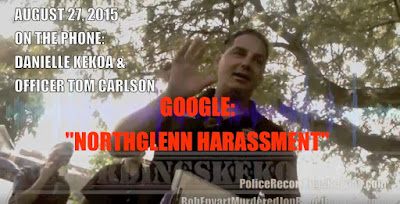 This latest attack on the Kekoa family in August 2015 by law enforcement is just another form of manipulation, intimidation and control, but Officer Tom Carlson of the Northglenn “Professional Mediation Task Force” had no interest in listening to the concerns of the Kekoas, only in facilitating a meeting with the neighbor. As a direct result of the government getting involved in a personal private matter, the problems with the neighbor have escalated through the roof and she feels at liberty to get even more aggressive with the Kekoa family.

All attempts to file reports about the harassment with the Northglenn Police since 2011 have been mocked, ignored and dismissed as the Kekoas continued to be targeted and threatened.

Danielle Kekoa made multiple attempts to contact the Supervisor Stephanie Pelster for a follow-up, leaving at least four voice messages, plus an email to the entire group, but Pelster the “Professional Mediator” never returned the phone call.  According to Officer Tom Carlson, Stephanie was out sick and the email messages sent by Danielle Kekoa to Northglenn police employees reportedly went to the spam folder and could not be accessed by any of the recipients, though they could see it on their spam folders. 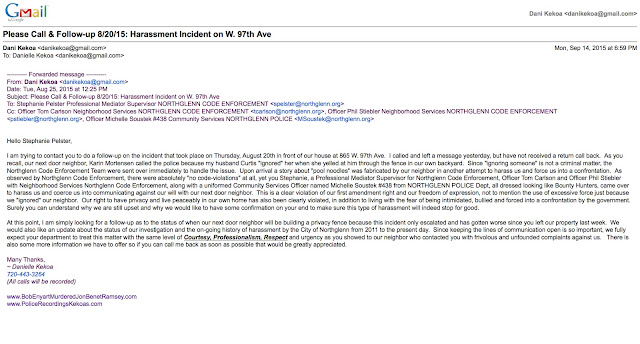 Officer Tom Carlson was also left a message and returned the call, finally talking to Danielle Kekoa a full week after the disturbance.   The purpose of the call was to discuss the problems with the program and to get it in writing that the City of Northglenn will no longer try to force the Kekoas into a confrontation with the neighbor.   Shortly after the phone conversation, Tom Carlson sent an email to the Kekoas at their request, saying in part:


“Based on our phone conversation, it is clearly evident you are not interested with being involved with any type of mediation between you and your neighbor. We as the City will not try to contact you in reference to mediation services from this point forward.”

SEPTEMBER 3, 2015, EXACTLY ONE WEEK AFTER TALKING TO OFFICER TOM CARLSON ABOUT THIS DISTURBANCE, THE ADAMS COUNTY SHERIFF'S OFFICE BEGINS KNOCKING ON THE KEKOAS' DOOR "AGAIN & AGAIN" WITH TWO ORANGE ENVELOPES FORCING THEM INTO YET ANOTHER CONFRONTATION WITH THE NEIGHBOR.

A FULL MONTH OF VIDEO "EVIDENCE" SHOWING THE ON-GOING HARASSMENT AGAINST THE KEKOAS BY THE ADAMS COUNTY SHERIFF’S OFFICE WILL BE RELEASED SOON. 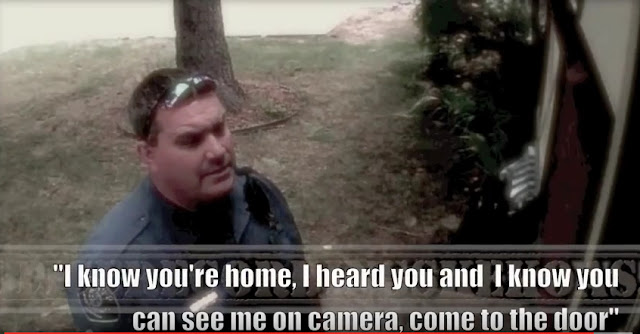