This is the boogie man caught on tape

by Timothy Charles Holmseth on October 5, 2018 at 5:27 P.M. CST
https://haleighcummingsdotme.wordpress.com/2018/10/05/caught-on-camera-attempted-deep-state-abduction-of-federal-witness-disabled-child/

Curtis and Danielle Kekoa, Northglenn, Colorado, defected from a Satanic cult after learning it was involved with kidnappings and murders of children.

Danielle Kekoa was interviewed by the FBI regarding knowledge she had about the Planned Parenthood mass shooting in Colorado Springs, and the child victim cases of JonBenet Ramsey, Dylan Redwine, and Jessica Ridgeway.

In this video you will see an actual attempted State abduction of the Kekoa’s disabled child.

In Re: Stanley P. Stevens

I am an investigative journalist, author, and publisher. I am actively investigating the true facts and circumstances behind the murder of JonBenet Ramsey, Dylan Redwine, Jessica Ridgeway, Caylee Anthony, as well as the kidnapping of missing child HaLeigh Cummings.

I have been personally interviewed several times by the Minneapolis/Jacksonville FBI regarding information I journalistically obtained regarding the HaLeigh Cummings kidnapping and Caylee Anthony murder. I possess Denver FBI interviews conducted with others regarding several of the aforementioned cases.

The following are facts I possess:
I have a recorded statement from the Northglenn Police Department advising the homeowner they should not answer the door unless they see fit.

I have a recorded statement from Stanley P. Stevens granting permission for his image, voice, and activities with Adams County to be published on the Web.

To be very honest, I have worked in the mainstream and independent media for over a decade and received first place awards from State organizations. I possess written references from elected leaders including a State’s Attorney.

I have never seen anything like this captured on video. With all do respect to you, my skin and hair stood up as I viewed this because I experienced the enigmatic feeling that I was seeing the ‘boogie man’ caught on tape.

If you have a statement regarding the activities of Stanley P. Stevens and Adams County Human Services please let me know asap. 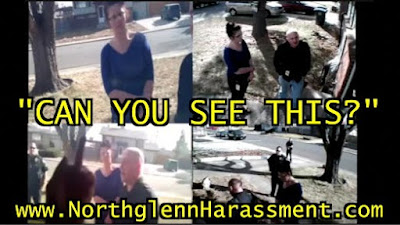 Posted by The Kekoas at 2:22 PM No comments:

www.NorthglennHarassment.com
DEEP STATE PROOF of the Shadow Government— THREE DAYS CAUGHT on CAMERA!
This is just another example of ritualistic gang-stalking & institutional harassment by local law enforcement & social services in an organized criminal conspiracy to have our six children unjustly seized by the state on false allegations of abuse—this time specifically targeting our disabled adult daughter.

"Stanley Stevens is NOT a licensed Social Worker."
— Chris Kline, Director of Human Services Department, Adams County Colorado
*Criminal conspirators who have called Social Services since 2011 include: The Child-Trafficking Whore Kimberly Kay Bowman, Dana Machado (Dani Kekoa's now dead brother), Sherry Roberts (Dani Kekoa's worthless bitch mother), and many other inadequate pieces of shit from the Satanic ShadowGov Cult! This is their sick twisted idea of showing "love and concern" for our family.