SEATTLE FBI ALERTED ABOUT SERIAL-KILLER IN COLORADO: ROBERT ADOLPH ENYART FBI#678532LA7 WHO WANTS TO "BREAK THE RECORD FOR THE MOST VICTIMS"—PLUS LISTEN TO TWO FBI RECORDINGS REMOVED

PRESS RELEASE: JonBenet Ramsey's killer, Bob Enyart boasts in email saying, "He may be a serial killer but he is OUR serial killer. Do you think he can break the record for the most victims? Go, Bob Go!"


FBI ALERTED FOR THE THIRD TIME IN THREE YEARS———STILL WAITING!!!

**JUST HOURS AFTER TALKING TO THE 1-800-CALL-FBI HOTLINE ON JUNE 3, 2014 THIS EMAIL WAS SENT BOASTING ABOUT MADELEINE MCCANN & BOB ENYART'S SHADOWGOV GOING INTERNATIONAL:

@ 18:15 on the call with the FBI, "When was the last time you had contact with Pastor Bob?" — slideshow displays Enyart's kekoacurtisiii@yahoo.com email about Madeleine McCann sent just a couple hours AFTER this particular call to the FBI on 6/3/2014. (Video was uploaded to YouTube on 7/20/2014 and removed on 8/29/14 less than a month later.) 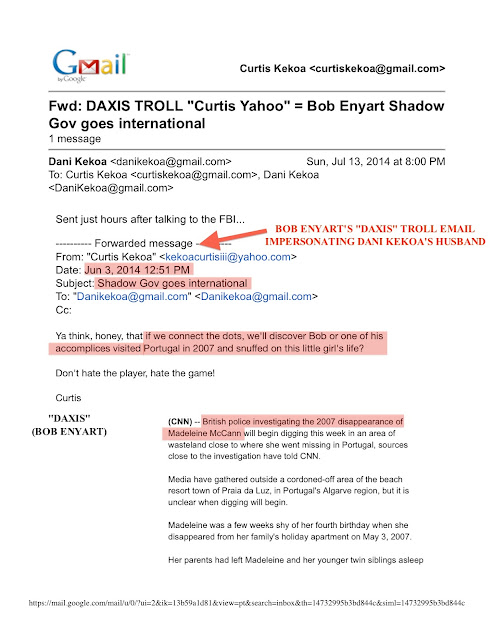